This tutorial is in “BETA” mode, please shoot me an email if you notice anything wrong with it! You know where to reach me ;)

Test your Python code with pytest

Testing your Python code is a fairly easy task, and this step-by-step guide will get you started on how to use it in your algo homeworks. It will not go in-depth, but will give you everything you need to properly and cleanly test your code.

One thing to note: the format used for your submission file is… not optimal. Because it has a dot in it, it is impossible to import it like any other module in Python using the good old from <module> import <stuff>. Moreover, the dynamic import recommended on Nathalie Bouquet’s website would make it impossible to use autocompletion in your IDE. I recommend that you keep the basic name of login_<homework>.py as given to you and only modify it when you are ready to submit. That way, you can import everything in your test file as just from login_<homework> import *.

Another thing to remember is that YOU MUST NEVER SUBMIT TESTS. Keep your tests in a separate file!

It might sound dumb, but make sure you install Python! We will need to install a few things through pip, which is Python’s package manager.

SHARING UNIT TESTS WITH FELLOW STUDENTS MAY BE CONSIDERED TO BE CHEATING AND IS SEVERELY PUNISHED AT EPITA. DO NOT SHARE YOUR TESTS WITH YOUR FRIENDS, AS THAT COULD EARN YOU A MAGNIFISCENT CHEATING FLAG (the famous Flag Triche).

I highly recommend that you use a full IDE for this. If you enjoy using Rider, consider using PyCharm from JetBrains, who are the guys behind Rider. The free Community edition is fine, but you also have access to the Professional version with your EPITA email address1. This guide assumes that you are using PyCharm, but most of what is written here can be done with anything.

Here is a tip that applies to both PyCharm and Rider (and also to any IDE from JetBrains): you can “search anything” by simply double pressing the shift key (right or left), and using the window that appears to type in what you want to search: files, actions, settings… It also shows the various shortcuts associated with each action, which is great for learning how to use JetBrains IDEs very efficiently.

When launching PyCharm, open it directly at the root directory of your homework (the one in which the login_homework.py file is), and point it to the interpreter you have on your system if it asks for it.

If PyCharm complains with PEP8 warnings, know that this means that your code does not comply with the general Python coding style. Respecting the coding style is essential for a language like Python which is based on indentation and not curly brackets. You can find out more about PEP8 here.

Two other essential keyboard shortcuts to know when using the editor:

Why use Unit Tests?

There are a few very good reasons for using unit tests. For those who do not know, a “unit test” is a small test that usually only tests a single function.

A unit test must be:

You must think of your unit-tests not as specific tests of what your code does but of what your code should do. Do note that there are also multiple valid return values for certain functions: you will have to have more complex assertions than just simple equality tests (result == expected) in these cases.

Inspired some of the points mentioned here.

Algo homeworks generally do not require huge amounts of testing or complex interactions between tests. pytest is extremely simple and straight-to-the-point, and does not require any sort of configuration in order to be used, which is perfect for us. pytest can also be extended with plugins, so, if something is missing in the basic pytest, a plugin probably exists.

Another massive advantage of pytest is that it only uses thing you already know, except for the assert keyword which will be explained later on.

Install Python if you have not done so already. For this guide, you will need to install pytest through pip, Python’s package manager. Use the following in your favorite terminal, console or whatever:

Run this and you should be good to go. You might need to use sudo to install everything on UNIX systems (Linux, Mac OS X), but I am not entirely sure.

Why not use a requirements.txt? If you are asking this question, (and know how to deal with this kind of issue) feel free to use a requirements.txt file and configure PyCharm accordingly. I just felt like it was not necessary for this specific guide, and pytest is good to have for any python file in my opinion. This is a guide for beginners for whom requirements.txt shenanigans are not really important.

Creating a unit test is extremely simple. Say I have a function called “add” in my main file “myfile.py”, which takes two arguments and returns their sum. I could simply write a few unit tests for it like so in a file named “test_myfile.py”:

This is a regular Python file, meaning you can write intermediate functions or do more crazy Python things. Test functions are identified by their test_ prefix.

Nothing here is really new for you, apart from the assert keyword. In Python, the assert keyword does nothing if the condition you give it is true, and crashes if the condition is false. It is a way of saying “I’m sure that this condition is true, so make sure that it indeed is”. This is basically the entire point of unit tests, and pytest smartly extracts information from the resulting assert error to show exactly what went wrong.

Each function will show up as a separate test. You can see that each assert statement corresponds to a separate test of the add function. And no, you do not have to be as thorough as I was there, but you really should, because that’s the whole point of unit-testing.

You may notice that, although we have no information on how the function was implemented, we can still create a lot of test cases, including trickier patterns like adding two negative numbers, mixing and matching negative and positive numbers, or even cases where we should get 0. If you are ever lost while writing test-cases, always think about what could be some nasty case that I wouldn’t want to have to deal with. Talk with fellow students about which cases they think are complicated, write tests for these cases, and check if your code is able to handle these test cases properly. Get creative!

The subject will often feature examples of the result a function should give. Say you have the following in your subject:

We can directly re-use them as unit tests!

It is a good idea to separate the function call from the comparison to the expected result. This way, if your code fails miserably with an exception (that is, it actually fully crashes because of the function you’re testing instead of just failing the assertion), you know that it is caused by the function and not weird == issues, because it will indicate the line with the call to my_amazing_function. This will also help you isolate cases where something was None somewhere. Failed on the assert? Might be a None problem. Failed on the function call? Something went wrong inside your code.

You have a few options here, but it mostly comes down to whether you are using PyCharm or not.

You will only have to do step 2A.1 once to tell PyCharm how to test your code.

Step 2A.1: Creating a configuration

Click the “Add Configuration” button in the top-right corner (or the existing configuration’s name and then Edit Configurations). Click the + in the top left corner, pick “Python Tests” and then “pytest”. Give it a nice name, and put the name of your test file in the text field right below “Target”. When you are done, click OK, and you can now run the test suite. 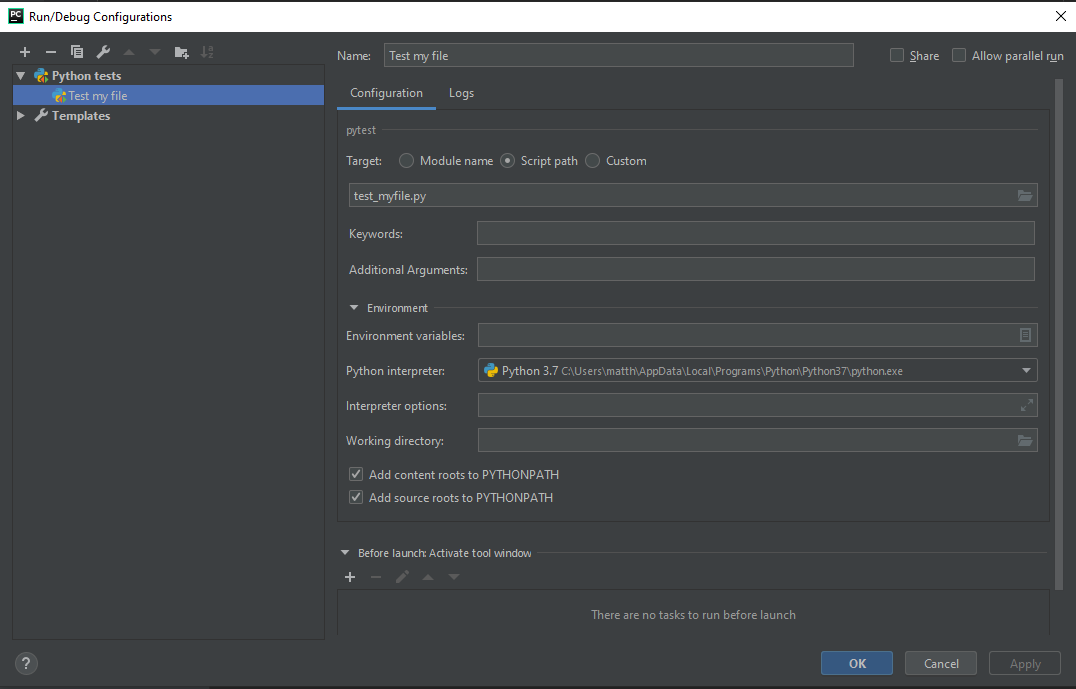 Step 2A.2: Running the tests

You can now run your test suite like any other run configuration, and you should see something like this pop up.

On the left, you can see the file that was just tested (test_myfile) along with the output from pytest on the right. Clicking on each individual test will display what was printed during the test, and details about the error (if any). If the test passed successfully and nothing in particular was printed, you will only see a dot.

Make sure that the “Show passed test” box is enabled (the tick on the top left of the results panel).

What if one of our tests fails?

Alright, I clearly don’t know how to create a simple add function there. Clicking on each failing test will give you detailed information on what failed in the assert statement. pytest even presses F for you, how nice!

A few tips: right-clicking on a test allows you to relaunch it separately, and you have a button on the left of the tests panel to relaunch only failed tests.

Step 2B: Using any shell 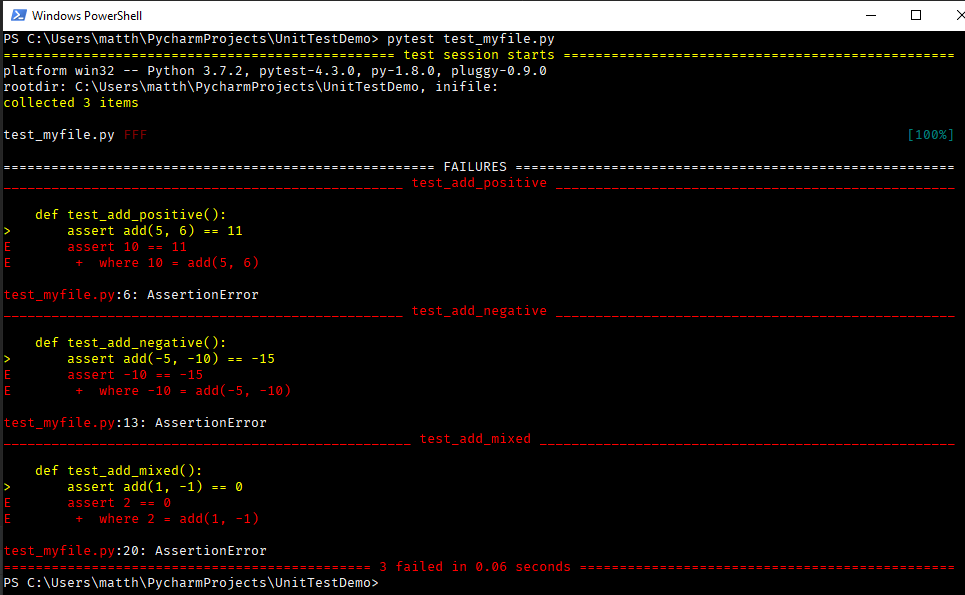 The results are fairly similar to what can be seen in PyCharm, so I am just leaving the screenshots as examples.

You can also just run the following command, and pytest will figure out where the tests are on its own:

… yup, that was pretty simple to type. And now that I have recovered my missing braincells and fixed my function, pytest shows us that, indeed, the unit tests work, hurray!

Congrats! You now know how to write unit tests for your homework project.

Need more out of your unit tests? I suggest you create very long ones which would be used to benchmark your algorithm. Use them in conjunction with cProfile to get detailed profiling results to determine which functions get the most calls. If enough people are interested, I might make a more detailed tutorial, but it all boils down to these few lines: